Yesterday I wrote about returning to a space of inner calm, but today I see my entire situation from a different set of eyes.

My unrest has been festering for a few years, but became acute a few months ago. I have a step-grandson who lives above us, and for the past few years he’s been working as a chemical engineer. He’s very smart — and a smart aleck — but also young and naive.

The problem began to worsen last September or October when the smells that accompanied him on his shoes, clothes, hair and body began to create sinus problems for me. I had been having headaches continually and I got my first sinus infection in seven years. For me, that was a major blow since I worked hard since 2002 to prevent them after having five of them in a span of two years. In 2002 I began using a Netti pot and haven’t had another infection until Oct. 2009. 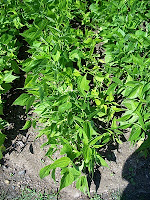 My doctor said it was indoor allergens and suggested I take allergy pills — at a cost of about $40 a month to me — until the springtime or as long as I needed them. But I don’t like putting chemicals in my body, so I thought it better to treat the cause instead of the symptoms. I knew the chemical smells were causing my problems, so after months of hints and suggestions, I finally outright asked my step-grandson if he could please change his clothes and shower before he came to eat supper with us. He took offense and decided not to eat supper with us anymore. I felt very bad that I had caused a rift, but the guilt of that decision lessened dramatically when I began to feel much better. The headaches and the sinus problems cleared up within two weeks.

Last night he came down for a rare supper together with his usual smells, so I grabbed my food and went to the couch in the living room to prevent the headache I knew would come if I sat at the table. I joined in the conversation, but he threw a comment my way indicating I was rude for watching TV and eating away from the table. Maybe it is rude, but my health is more important to me. He is still oblivious about the impact of his smells on my health. I tried to keep the peace by biting my tongue and saying ‘There are many rude things that go on.’ Inside I was angry.

Yesterday I thought my lesson was to try to maintain my inner peace, but today I see differently. I see my biting my tongue as sharing a seed of knowledge. Whether that seed gets planted, fed and nourished is out of my hands (like the seeds of my beans from last year’s garden). I believe my Higher Power led me to that understanding and now I know, again, I can only do what I can do and I must let go of the rest.

Kathy Ruff is a seasoned, freelance business and inspirational writer and author of the Sharing Peace on the Path blog.
View all posts by Kathy Ruff →
This entry was posted in Uncategorized and tagged Peace, Spiritual living. Bookmark the permalink.