Being One with Nature 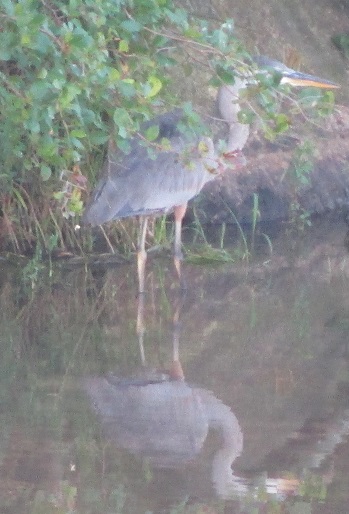 Saturday morning I went to the breast of the dam (Mauch Chunk Lake Park) before dawn.  When I left Coaldale, it was clear and the promise of a sunrise lingered on the eastern horizon.

When I traveled down Route 902 from Summit Hill, I could see the valley was covered in fog.  I probably wouldn’t see the sunrise because of the fog, so I decided to do some Qi Gong on the breast instead.

I ventured to the far side of the breast of the dam to do my morning exercise. During my solitary movements, a huge blue heron flew by me toward the far side of the lake.  He was close enough I couldn’t help but notice, despite the thick fog.  I could hear the morning birds singing and not much else.  I felt I was one with nature.  It’s amazing how outdoor movements seem to connect you with everything around you.  For me, it’s never been the same connection indoors.

I continued my movements until I finished.  The fog had begun to dissipate, and I noticed the blue heron had flown to and stayed at the corner of the lake, probably searching for breakfast.  He seemed unafraid but a little wary as I ventured closer for a few pictures.

The blue heron and I were both just doing our own things, at one with ourselves, each other and the world.  Not intrusive or demanding; simply accepting the moment.

Being at one with nature…I wish the world would realize how beautiful that is, how natural that is.

Kathy Ruff is a seasoned, freelance business and inspirational writer and author of the Sharing Peace on the Path blog.
View all posts by Kathy Ruff →
This entry was posted in Inspiration, Nature, Spiritual Living and tagged MCLP, Nature, Outdoors, simplicity, Spiritual living. Bookmark the permalink.