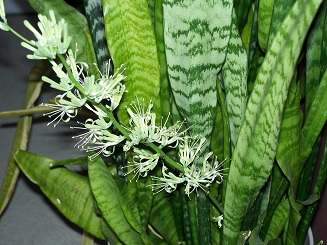 I may have shared this in the past, but I though t it was worth repeating.  Did you know that the snake plant (a/k/a Sansevierias or Mother-in-Laws Tongue) blooms?  Yes, it does.  According to gardeningknowhow.com, although extremely rare, the plant will produce a flower stalk when it’s mildly and continually stressed.

After three plus decades of carrying this one from place to place every time I moved, this root-bound snake plant bloomed.  When I first saw it, I thought someone had put a sprig of some other flower in the pot.  I couldn’t believe it bloomed!

With a little bit of research, I found a rare event had occurred under my watch.  Granted, neglect had contributed to the event since I hadn’t transplanted the plant for a long time, but that’s what it took to yield the blossoms.

I really enjoyed the sight but felt a bit guilty that the plant was stressed, so I broke it up and got three nice-sized plants out of this one.  The reduction in its stress meant I would no longer see the rare blossoms unless I neglect them for the next 30 years.  But my conscience is clear.

Though I probably won’t see another bloom for a while, isn’t it great to believe in the possibility?

I think I’ll expand that belief to other areas of my life…I’ll believe in possibilities!  What about you?

Kathy Ruff is a seasoned, freelance business and inspirational writer and author of the Sharing Peace on the Path blog.
View all posts by Kathy Ruff →
This entry was posted in Inspiration, Nature, Simplicity, Spiritual Living and tagged Creativity, inspired living, Nature, Spiritual living. Bookmark the permalink.

1 Response to Believe in Possibilities