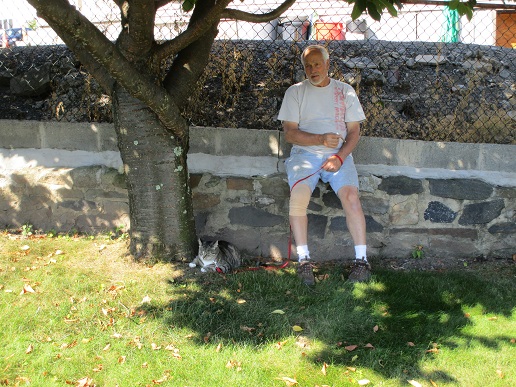 My hubby Tom and Abby the tabby like to go out for a walk on occasion.  Tom smokes his cigar to keep the bugs away and Abby just goes where she wants, when she wants.

Who’s walking who?  Sometimes looks can be deceiving. Though Abby’s the one with the leash around her neck, she really controls where they go and how long they stay.  She let’s him know when it’s time to move on or when she is ready to go in yet.

It’s seems obvious from the picture, but reality is something completely different.  In life, sometimes the obvious is not as it appears, either.

There’s an old adage – don’t believe anything you hear and only half of what you see.   What we think we see may have a different reality than what we perceive.  The one who’s ‘pulling the strings’ may not be the one in control at all.  A puppet master may be visible in the scene or totally invisible.  Or, it could be just as you think it is.  Many times you’ll never know.

We think we know, but we really don’t know what’s going on at all.  We create a story in our minds that fits what we believe, even though we have no idea what’s going on behind the scenes.

I recall a conversation once where someone believed a missing ‘For Sale’ sign on a property meant someone had bought the property.  I suggested there might be other options, such as the listing agreement had expired, the bank foreclosed or vandals stole the sign.  That’s just one example of how we believe the reality we envision…not necessarily the truth.

Next time you make a judgment based solely on what you see, or what you think you see, stop.  Remember that the truth may be something completely different from what you believe.