Go Tell It On The Mountain 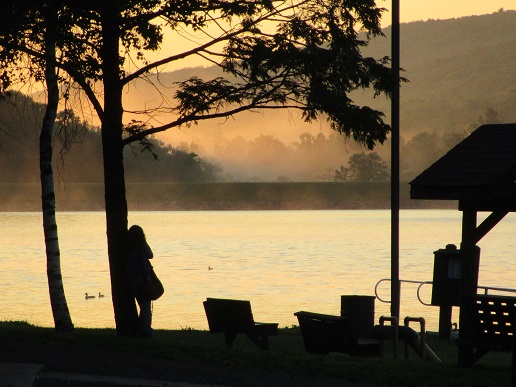 Did you ever get what some people call an earworm…a catchy tune that sticks in your head and no matter what you do, you keep ‘hearing’ that tune?  I woke up this morning to the tune “Go Tell It On The Mountain.”  It’s stuck in my head now for a half hour.

Today’s picture is one I thought was lost.  It was one I took before my kayak outing for the morning as I waited for Tonia for our 6 a.m. start.  The SD card and camera later ended up swimming in the lake as I explained in my June 7 blog.  I held hope I’d find the card but accepted the ‘fact’ I may never find it.  I realized even if I did, the pictures may be lost because of their swimming adventure.

My husband finally took the seat out of the truck last week, and the lost card was found…and it still worked!!  (The camera still doesn’t work, but maybe, just maybe, if it dries out for a few months it will.  I have hope.)

The ‘fact’ I created in my mind was just that…created.  I created a scenario the card was lost and/or unrecoverable, but I had hope.

Hope is a very powerful feeling, as are love, joy and peace.  Each radiates energies that ripple into the environment like the mini-waves created when you throw a pebble or small stone into a calm lake.  Those ripples continue to expand from the center until they seem to disappear.  But just because the ripples disappear doesn’t mean the energy is gone.  It has just become intertwined with everything around it, sharing its true essence.

Today’s picture is a silhouette of Desha taking a picture of a morning sunrise at the Mauch Chunk Lake Park.  This picture was ‘lost’ but now is found.  Keep hoping!  And Go Tell It On The Mountain…now you’ve got that earworm, don’t you??  🙂

Kathy Ruff is a seasoned, freelance business and inspirational writer and author of the Sharing Peace on the Path blog.
View all posts by Kathy Ruff →
This entry was posted in Inspiration, Nature, Spiritual Living. Bookmark the permalink.