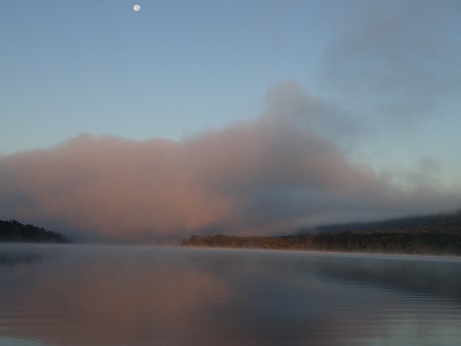 The colors of the morning sunrise radiated to a foggy Boat Launch B at dawn this (Saturday) morning.

To the unknowing eye, you might think these ‘clouds’ of fog were a nasty storm upstream.  You also might think I was looking east instead of west, with the sunrise behind the fog instead of behind me as I took the picture.

You can’t see the bigger picture.

Unfortunately, many of us fail to see the bigger picture in the circumstances in our lives. 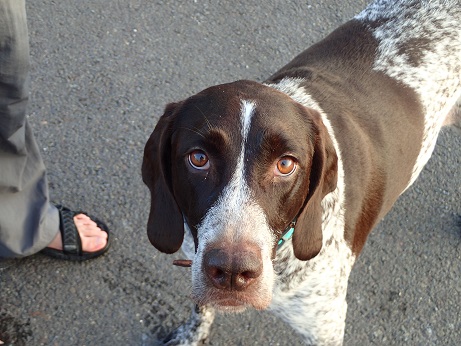 Ruby fell into that trap.

As we finished our kayak outing, Tonia and I strapped our kayaks for the trip home, packing up all our accessories.

But Ruby wasn’t ready to go.

She decided to check out the flock of ducks and geese swimming near the dock at Boat Launch A.  Her focus landed on one particular duck and that was it.  She couldn’t see anything else.  She couldn’t hear Tonia telling her to come.

Ruby began swimming through the flock, heading toward and focusing only on this one duck.  Tonia yelled for her to come again.  Ruby’s focus was so intent, she didn’t hear (or maybe didn’t want to hear) and continued swimming after the duck.  Unfortunately, she didn’t have her life vest on anymore and she was swimming toward the middle of the lake, oblivious of anything except the duck.

Tonia began to panic.  Ruby wasn’t listening and continued to swim further out and upstream.  Tonia knew it was a problem and said, ‘Get the boat.’  I ran to the truck to get the kayak while Tonia took off her shoes and hat, dove off the dock and began swimming toward Ruby.  I unlocked the kayak, was helped to carry it to the water’s edge by a gracious stranger and paddled quickly to Ruby’s location.

By the time I re-entered the water, Ruby’s duck had flown away and Ruby showed signs of panic as she realized she wasn’t near the shore and Tonia wasn’t behind her. She hadn’t seen the bigger picture.

Tonia continued swimming toward Ruby as I paddled quickly toward Ruby, grabbed her and held her head above the water.  In short time, Tonia was at the side of the kayak, huffing and puffing and holding Ruby, who was still trying to swim.

We all adjusted our positions and I paddled until we got to the shoreline, relieved and happy both Tonia and Ruby were okay.

Moral of the story:  Focus can be a good thing, but not seeing the bigger picture can lead to problems or be disastrous.  Take time to look beyond your tunnel vision…there may be a lot more to see in the bigger picture.

Kathy Ruff is a seasoned, freelance business and inspirational writer and author of the Sharing Peace on the Path blog.
View all posts by Kathy Ruff →
This entry was posted in Inspiration. Bookmark the permalink.

2 Responses to Seeing the Bigger Picture?