Memorial Day Parade on the Canal 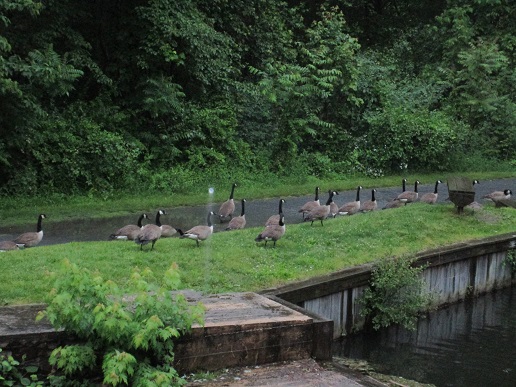 Yesterday’s Memorial Day festivities began early-morning on the canal.  This gaggle of adult geese meandered its way up the canal, offering their own holiday parade.

The only ‘music’ you could hear was the splashing of the water as it passed through the lock and an occasional comment from one of the geese.

Over two dozen birds waddled up the trail.  Ironically, no babies took part in the parade.

The first half of geese jumped in just beyond the bench; the second half went up a little further and then entered the waters.

My picture also caught what I at first believed to be a raindrop on the lens.  But the video I took had none.  I have to ass-u-me it’s an orb directly over the head of one of the geese, shining down toward the lock.  Odd.

If you’d like to see a parade, come out on the canal by the Weissport trail head early – on or before 6 a.m. every morning.  You can see a parade like this, but more likely you’ll see pockets of parents and little ones gathering their breakfast goodies.